Mono 2.0 is a portable and open source implementation of the .NET framework for Unix, Windows, MacOS and other operating systems.

Mono 2.0 is a major milestone in the Mono project, and it supports the following features:

These compilers are part of the Mono 2.0 release:

Mono includes profiling tools, the standard development kit tools that are part of the .NET framework

Licensing is available for statically linking Mono (for the Apple iPhone, Nintendo Wii platforms and other proprietary operating systems). For licensing information, you can contact us

Mono 2.0 contains complete implementations of .Net 2.0's ToolStrip/MenuStrip/StatusStrip/ContextMenuStrip controls, which look better and provide many more features than the orginial controls that they replace. (Don't worry, the old controls are still there!) 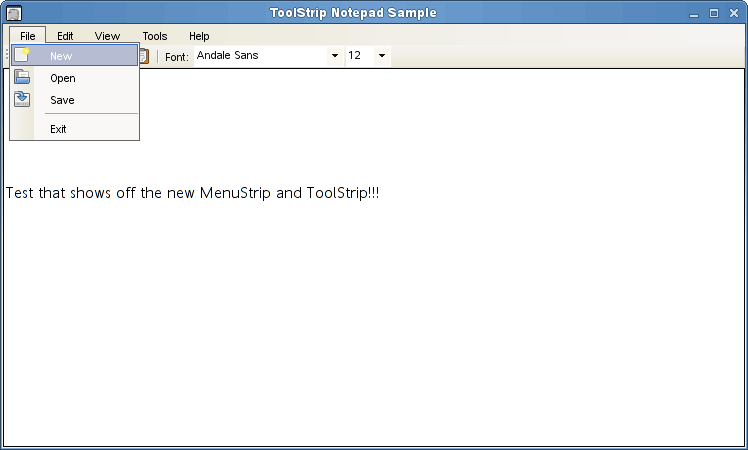 Mono 2.0 contains a much better implementation of DataGridView. There are still some missing features, such as VirtualMode, which will be addressed in future Mono versions. However, this new version has considerably more features than previously.

Mono 2.0 contains an implementation of WebBrowser that is based on Mozilla's Gecko HTML rendering engine. 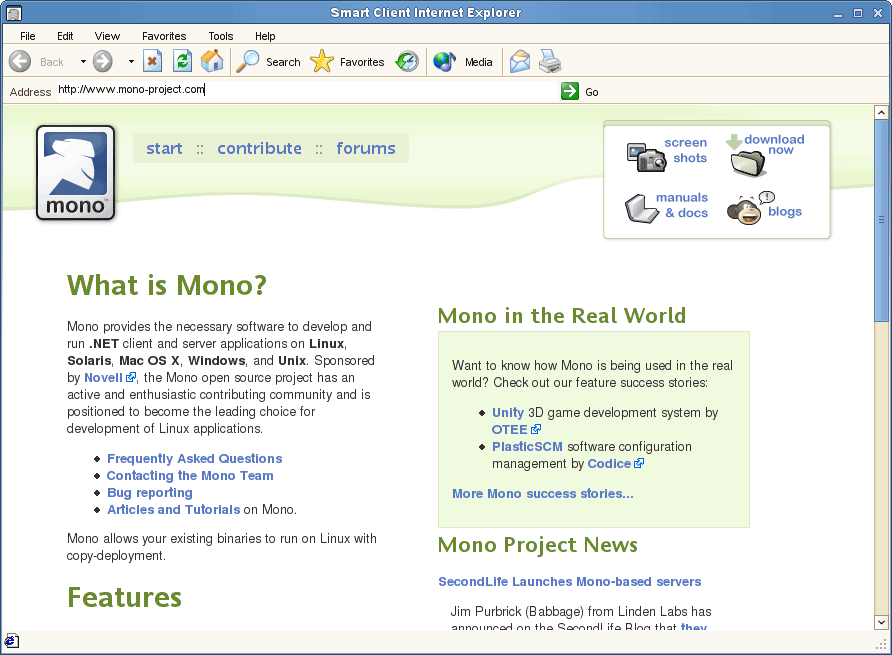 Mono 2.0 contains a complete implementation of FlowLayoutPanel, allowing controls to be positioned by flowing to fill available space. 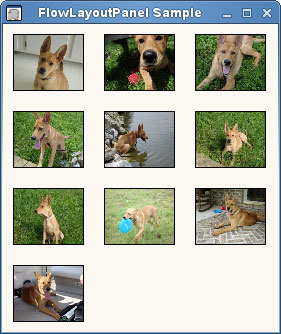 Mono 2.0 contains an implementation of SplitContainer, which provides an easier way to make adjustable layouts than using Splitters.

Windows.Forms: Putting it all together

Some examples of public 2.0 applications running on Mono 2.0.

Paint.Net hasn't been fully ported to Mono yet (due to p/invokes), but we can still see it using the new 2.0 controls. 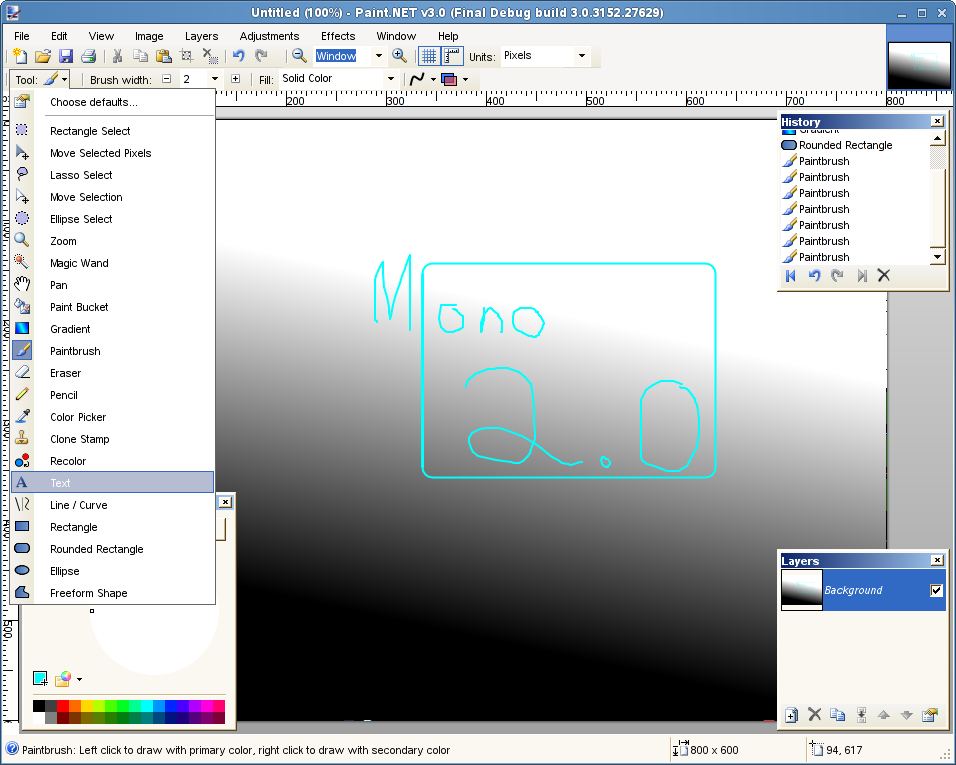 NClass is a UML modeling application written in C#. 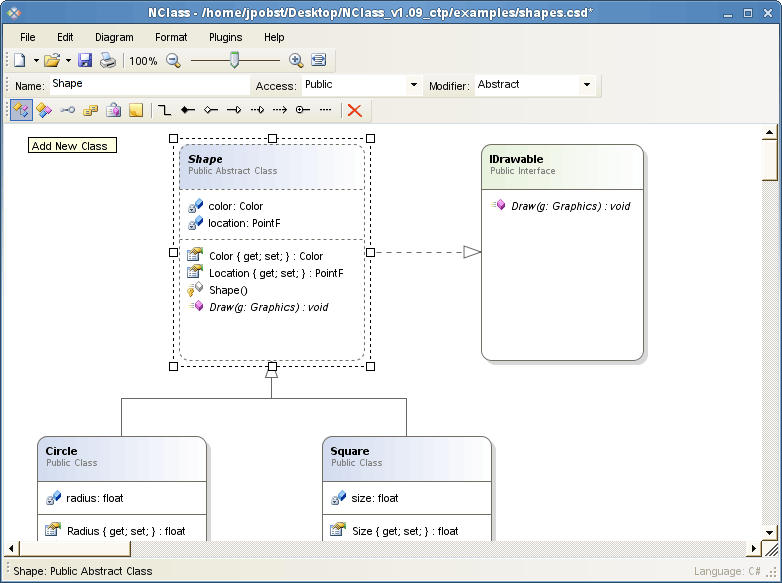 These are the major changes that happened since the 1.9 release of Mono.

All of the changes since 1.2 are documented in the following release notes:

This release contains 151 rules (56 new and many updated) divided into 14 categories (2 new) and yet is faster than the versionshipped with Mono 1.9. More...

The compiler now support expression trees (turning expressions into an AST at compile time when the type of a parameter is a System.Linq.Expressions.Expression). This completes the C# 3.0 support.

Over 60 reported bugs in the compiler were fixed and many of the internals have been cleaned up. Extensive refactoring and hardening of the C# 2.0 and 3.0 support are now better integrated.

A major rewrite of the anonymous method/lambda support in the internals of the compiler now optimizes the resulting code, and fixes several bugs in this area.

The compiler is now dual licensed under the MIT X11 and the GNU GPL version 2 (only).

The compiler now supports #pragma checksum for use with ASP.NET debugging and #line hidden, as well as flagging more compiler-generated code properly (to avoid the debugger single-stepping into those bits).

LINQ to Dataset has also been implemented.

Mono now has a performance counters implementation that can be used to monitor various statistics of Mono processes. To access this API you use the System.Diagnostics.PerformanceCounter classes.

Currently the counters can only be read from the same process, there is no setup to share across processes.

This was one of the missing features from our ASP.NET 2.0 implementation, we now have a it available (Marek).

Support for native methods in assemblies was developed by Kornél Pál. These are assemblies that contain a mix of CIL bytecode as well as native code (x86 or x86-64 for now), generated by Microsoft's C++ compiler. Native methods are referred as "IJW" for it-just-works thunks.

This feature is only supported for Windows.

Mono now supports 64-bit indexed arrays on 64-bit systems. Although this is permitted by the ECMA standard, this today is a unique feature of Mono as .NET on Windows does not support 64-bit array indexes. This code was developed by Luis Ortiz at Interactive Supercomputing and integrated by Rodrigo Kumpera.

This feature is useful for developers that needs to manipulate very large data sets with C# arrays.

To use this feature, you must configure Mono with --enable-big-arrays.

To use this feature, you must configure mono with --enable-dtrace, details about this feature are available on the DTrace page.

Several changes to improve the scaling and performance of both ASP.NET and ADO.NET (Christian, Gonzalo, Marek, Varadhan).

Increased performance is now available if you use the option MONO_DEBUG=dont-free-domains option on ASP.NET sites.

Windows.Forms now supports international keyboard input through XIM. This new support has been tested with both scim-anthy and Atok X3 (iiimx).

The monodoc command line tools (e.g. mdassembler, monodocer, monodocs2html, and monodocs2slashdoc) have been wrapped into a single mdoc program to normalize and simplify usage.

Then compile Mono itself:

These are the git commiters to the Mono 2.0 release:

We apologize in advance if the list is incomplete and your contribution is not listed. Please email [email protected] any corrections.

These are the contributors that sent patches: